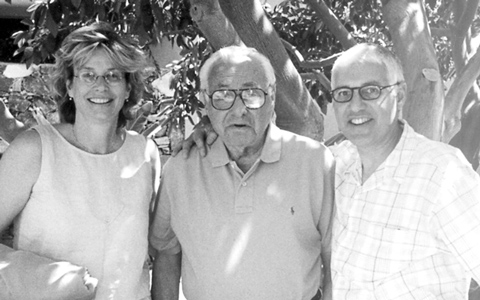 In 1999, Dan Michel, Dakim's founder, began developing cognitive stimulation exercises to help his father, who was at that time suffering from memory loss...

1999Dan Michel, Dakim's founder, begins developing cognitive stimulation exercises to help his father, who is suffering from memory loss (ultimately diagnosed as Alzheimer's disease). The positive effects of these exercises inspire Dan to recognize the potential benefits of using innovative technology to deliver an effective and practical brain fitness program.

2002Dan reaches out to his friend, expert developer, and entrepreneur, Jerry Robinson, who joins him as a founding partner. Working out of Dan's garage, they set out to invent an entirely new brain training system.

2003Dan and Jerry are introduced to Gary Small, MD, Director of the UCLA Longevity Center, who becomes the company's Chief Scientific Advisor. Later that year they create their first prototype of a computer-based brain fitness system, designed by Jerry, using an Apple eMac fitted with a touch screen interface.

2005Encouraged by early results and growing body of research showing the effectiveness of cognitive training, the Company secures funding from angel investors and moves to new corporate offices in Santa Monica, CA. Later that year, it presents its prototype of the Dakim BrainFitness System at the Tenth White House Conference on Aging in Washington, D.C.

2011The Company wins another New Product & Technology Award from the Mature Market Resource Center, this time for its Healthcare Professional Software.

2013Dakim wins the prestigious Edison Award for Innovation in the Personal Wellness category. Later that year, the results of a peer-reviewed clinical trial conducted by UCLA are published, proving the effectiveness of Dakim BrainFitness!

Dakim's team focuses on creating innovations to enhance the efficacy and usability of Dakim BrainFitness:

Dan Michel spent more than 30 years helping some of America’s most successful companies market and advertise their brands. In the 25 years prior to founding Dakim, Inc., he was Chief Operating Officer of BBDO Worldwide/Los Angeles, President of Marketing at Columbia Pictures, and President and Co-Creative Director of his own award-winning creative advertising agency, Michel/Russo, Inc.

Dan is responsible for multiple business and marketing success stories, including the introduction of Aim toothpaste, the conversion of BankAmericard to VISA, and Jack in the Box restaurants’ remarkable business turnaround. His clients have included Lever Brothers, Taco Bell, General Mills, VISA, Jack in the Box restaurants, Oral B, Warner Bros., Johnson & Johnson, Ralston Purina, and Jos. E. Seagram & Sons.

Dan’s father was diagnosed with Alzheimer’s disease in 1993. He founded Dakim in 2001 to develop a more effective and practical means of providing brain fitness exercise to help seniors prevent or slow the development of dementia and maintain their quality of life.

Dan earned a B.A. from Claremont Men’s College (now Claremont McKenna College) and an M.S. from Northwestern University. He is a member of the Academy of Motion Picture Arts & Sciences.

Jerry Robinson is the energetic and dynamic Chief Technology Officer of Dakim, Inc., and a key member of the development team for Dakim BrainFitness.

Prior to joining Dan Michel in the development of Dakim BrainFitness, Jerry had operated two successful companies of his own. Health For Life, a research and publishing company specializing in physical conditioning programs, was widely recognized for providing consumers and professional athletes with the most accurate and reliable information on physical health and exercise. JPR Engineering, which Jerry founded in 1980 and sold prior to joining Dakim, is a computer consulting firm specializing in custom turnkey solutions on a variety of computing platforms.

Jerry’s personal interest and professional experience in the fitness and technology fields make him ideally suited to guide the technological direction of Dakim BrainFitness. A graduate of Stanford University, Jerry also performed advanced work in biomechanics and taught for two years at his alma mater.

Dakim works in collaboration with its team of scientific advisors to create the most effective brain fitness program:

Dakim's Chief Scientific Advisor, Gary Small, M.D., is the Director of the UCLA Longevity Center, a professor of psychiatry and biobehavioral sciences, and one of the world's leading physician/scientists in the fields of memory and longevity. He has developed breakthrough brain-imaging technology that allows physicians to detect brain aging and Alzheimer's disease decades before patients show symptoms. Dr. Small has also authored more than 500 scientific publications, received numerous awards, written two bestsellers (The Memory Bible, The Memory Prescription), and was named one of the world's top innovators in science and technology by Scientific American. He lectures extensively around the world and has appeared on numerous national television shows.